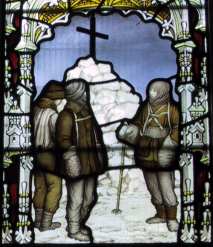 The Death Zone: When History’s Explorers Went Too Far

"...the end cannot be far. It seems a pity, but I do not think I can write more. For God's sake look after our people."

Most of us recognize the names but little else of the great explorers and adventurers of history. Some are buried almost anonymously in Westminster Abbey alongside the kings, queens and statesmen of antiquity. Obscure mountains, plateaus, bays and valleys are named after many others. However only the most studious or obsessed amongst us know more than the briefest of facts about these larger-than-life men (and women), and what they achieved during their lifetimes. Few of us may have read a biography of one or another of them, and only the most colorful have had films made of their adventures.
But don’t we yearn sometimes to know a little more about the lives of our heroes and why they were such important people in their time? Don’t we wonder too how their days may have ended and how they may have died? Most have seemingly disappeared into the mists of history without a cry. Now and again one is brought back to life momentarily by a father’s bedtime story or a professor’s anecdotal aside. Arguably it is unjust that those who have faced the greatest perils in life have been forgotten without a nod to their victories or a thought as to how they may have died. Most of our heroes- Humboldt and Darwin, for example- died happily and rightfully of old age back in the beds of childhood homes in picturesque county villages and surrounded by loving- if saddened- family members. Clements Markham, the driving force behind the explorations of David Livingstone, Robert Falcon Scott and many other Victorian supermen, died old and in bed but only after his bed-curtains caught fire from a fallen reading lamp. Hardly dramatic stuff befitting a figure of such stature. Still a very select group of explorers met deaths as spectacular and dramatic as the adventurous lives they led. Here then, in chronological order, is my list of the top 15 explorer’s deaths.

* In italics…notable film or recent book about the explorer

“If you climb a mountain for the first time and die on the descent, is it really a complete first ascent of the mountain? I am rather inclined to think personally that maybe it is quite important, the getting down, and the complete climb of a mountain is reaching the summit and getting safely to the bottom again.”