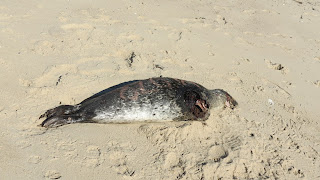 Build it and they will come?
The race to package the Great White Sharks of Cape Cod
“The argument reaches into the heart of the sport, and even into each individual’s motivations and basic philosophy of life: In essence, why do you surf? Are you a competitive glory-hound or a soul surfer? Are you trying to make a buck- either as a mercenary or a profiteer- or are you participating in a way of life while training to have transcendent experiences few humans will ever have? Further who has the right to promote, and profit from, the waves?”
- from Ghost Wave by Chris Dixon

“What if they don’t even come back this year, or next year, or any other year for that matter?”

The words of conservationists, Ryan Smith and Priscilla Bloomfield of the Atlantic White Shark Conservancy, were ominous, and thought-provoking. With all the excitement and concern surrounding the spectacle of Great White Sharks venturing into outer cape waters between Truro and Chatham’s Monomoy Island the truth is no one really knows what the sharks will be doing in the years to come. No one denies that the visible presence of these sharks in cape waters is due to the ever greater numbers of seals flocking to the outer cape’s secluded beaches and which the sharks feed upon. But what if other factors came into play such as warmer water temperatures due to global warming, the possible decision to cull an out-of-control seal population, or even a craze for the sport fishing of sharks...any of these factors or a combination of them could drive the sharks from the region and that’d be the end of the discussion. Plenty of people are hoping for something just like this, by the way.

On the other hand, and this is probably a more likely scenario, the sharks will be back again this summer, they will continue to visit cape waters for the foreseeable future, and we are going to have to figure how to deal with them, and live with them. We, as a community, must recognize the powerful spell and attraction these awesome fish have over most of us, and begin to consider what sort of consequences might result from that fascination.

The presence of great white sharks in any significant number near our shores obviously offers our biologists a rare opportunity to study and better understand one of the most misunderstood, if not infamous, denizens of the deep. Doctor Greg Skomal, Massachusetts state biologist, and his mates are happy-as-larry to have these sharks dining so close to home all of a sudden. And the more controversy, and even trouble, they cause, the more the scientific community will learn and (supposedly) pass onto the rest of us, for our enlightenment and safety. The presence of sharks in our cold waters shines a brighter light on the wonders of the sea world beyond our sandy shores, and this is something organizations such as the Audubon’s Wellfleet Bay Sanctuary and Brewster’s Museum of Natural History will be capitalizing on and turning into an array of fascinating educational programs for our citizen-scientists and especially our children. Cape Cod is much more than an idyllic beach walk or contemplation of the sublime passing of nature’s seasons; Cape waters are home to an impressive, unique and unrestrained collection of some of our world’s most impressive wild animals. Humpback Whales, Harbour Seals and now Great White Sharks define Cape Cod today as one of the world’s preeminent locations to see animals of the wild kingdom on the grandest of scales on its most spectacular stage, the open ocean.

And therein lies my major point. Are we ready in any way for what the recognition these attractions mean for our sleepy, small town communities, or for the animals themselves, or for the habitats they frequent? It is a blessing that in the whale-watching fleets of Provincetown we already have an efficient model of sustainable tourism, a common-sense approach to the situation- developed over time of course- that is a win-win situation for animal, man and habitat. We would do well to study this model as we begin to consider how we are going to offer up our sharks to the maddening crowd that will be coming. And come they will. If the tourism activity of the last couple of years is any indication shark fever is already well established, particularly in the town of Chatham. This is only going to increase which is arguably good and bad. No one can deny the incredible economic potential of a successful tourism operation based upon the presence of mighty marine animals. The words, Cape Cod, have long been calling cards to generations of families and vacationeers, a brand name if you will. Add Great White Shark to that and the sky’s the limit. Think Coca-Cola, Nike, Apple...get the picture?

Developing a business plan to turn the spectacle of Great White Sharks into a sustainable tourism product should be a priority for all towns concerned- a plan that benefits and protects the greatest number of persons possible, while at the same time guarantees the safety of the animals concerned and the environs they inhabit.

Besides the obvious jockeying for position by members of the scientific community, who I am sure would like nothing more than to restrict contact with these sharks to their people and no one else, other actors in this play will include without a doubt tourism operators wishing to capitalize on the potential gains offered by the viewing of great white sharks. Will state and local authorities follow the initial advice of the scientific community to restrict if not prohibit access to the waters that house these sharks? Or will the scientific community join hands with the more capable and responsible of local tourism operators- if such people can be identified- to work towards guaranteeing the conservation and preservation of Great White Sharks through a form of ecotourism that benefits the public and private sector together.

In the Amazon, where I have lived and worked in the area of sustainable tourism for the last 20 years, the closing-off to the public of conservation lands that are home to some of the planet’s last indigenous peoples has backlashed. The larger population outside these reservations has not been allowed to benefit economically from the presence of these peoples. The indians within these often vast reservations have been abandoned and grow impoverished when they are left to the quantitative methods of ignorant politicians and cold-hearted social scientists. The result is that these indians are forgotten by the larger society that might otherwise have fought for their happiness, health and social well-being. Once forgotten they are doomed to disappear for there is no one left to fight for them. Through first-hand experience I observe that the lip service paid towards the tourism sector in the Brazilian Amazon has resulted in more illegal tourism than ever, as stricter restrictions are dealt with by a demanding market in ever-more careless and unregulated visits. The most well-meaning of tourism operators in Brazil, the ones who promote and practice a real form of ecotourism, have turned away form a tourism product the government seems uninterested in promoting, or unwilling to promote responsibly. In a culture devoid of of regulation and responsibility the indians have been left at the mercy of the most ambitious of promoters and ruthless of pirates.

So what’s it gonna be on Cape Cod? The same-old, same-old...so-called specialists of the private sector and so-called spokespersons of the public sector deciding what’s in everyone’s best interests- including the sharks- a policy no doubt to be based upon what’s easiest and most expedient in the short-run for these special interest groups? Or are we going to open up the conversation to the plethora of voices and opinions buzzing around us and develop a series of projects that will give us all satisfaction in the long run, including the sharks?

I want to conclude with one last thought. Above all our concern should be for the well-being of the animals we are talking about. The endangered animals of our threatened planet deserve more from the human race who many call the stewards of the planet though who have rarely shown the qualities becoming of such a title. Sharks and all animals should first and foremost be free, free to wander where they may and do what they may. There is after all no such thing as a malicious animal. Animals cannot be defined as good and bad. They are innocents. They are instinctively natural in all they do. We need to understand this, respect this and champion this. Therefore if we ALL decide it’s best to leave the sharks alone and create a marine sanctuary around them to protect them, fine. That’s what we’ll do. But let’s not assume that any one group has the final and only say in the matter before all have had a chance to weigh in. As even Dr. Skomal admits, no one approach to sharks should necessarily be judged better or worse than any other.

“ We are all familiar with sharks. some fear then, some eat them, some fish for them, some swim with them, some love them, and some study them. i do all of these things...[I am] someone who has watched sharks, held sharks, killed sharks, and saved sharks.”
- The Shark Handbook, Dr. Greg Skomal, pp. 10-11

No one said this would be an easy discussion.