Fact? Or (Amazon) Fiction?
A Review of Fiction Written or Set In the Amazon

As an Amazon tour operator I am frequently asked by travellers about books to read on the subject before visiting here. And my suggestions are invariably, and without much thought, works of non-fiction such as Kirchner’s A Neotropical Companion, Goulding’s The Flooded Forest and Shoumatoff’s The Rivers Amazon to name just a few. But what about fiction, the traveller might then ask? What works of fiction set in the Amazon would I suggest to the prospective Amazon adventurer? Well it just so happens that, apart from being a writer interested in all literature set in the Amazon, I am also a fiction writer myself and I do have something further to offer the Amazon reader in that department if I put my mind to it.
Oddly enough there is actually not that much fiction written or set in the Amazon. And that should surprise most readers raised, as I was, on a heavy diet of African and to a lesser extent Asian literature. You’d almost expect the same wealth of literature from the Amazon. After all its name possesses great mythic power, and its history offers a wide range of colourful, human experience. But the Amazon was never a place of Man- it only began to be peopled 100,000 years ago- it has always been a greater place of Nature.
Of those who have lived in the Amazon very little in the way of a cultural identity was ever developed by them. Apart from oral myth of the most bizarre nature- plenty of creationist myth and animist legendry- the Indian peoples have left us little. Then came 1541 and the beginning of the Conquest of the New World. The Indians were replaced by brutish and often desperate immigrants- caboclos in the Brazilian Amazon and ribeirinhos in Spanish-speaking Amazonia- men who never enjoyed the luxury of developing a cultural identity either. They were too busy trying to survive and had no time to write poetry, or play music, or develop dance.
Today the Amazon is still a cultural backwater whose inhabitants are more focused on survival- or, at best, the incessant rape of the region for her organic and inorganic wealth- than the contemplation and celebration of her Nature in art or literature. Only in the present generation, as the last vestiges of a caste system based upon an extractivist economy have been eliminated by virtue of modern economic development, have artists evolved and have discovered the Nature around them. At present there is a cultural explosion going on across the whole of the Amazon unparalleled in her history. It is an exciting time to live in the Amazon; a period full of promise and opportunity.
Historically writers of the Amazon have been far and few between. Most have understandably been foreign-born, some just passers-by. Few, if any, travelled here with the express purpose of researching and writing fiction. Some did not even visit the region at all before writing about it in their novels. What follows is a sampling of Amazon writers and their works…of fiction. 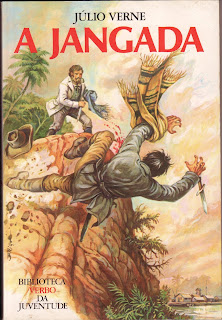 Jules Verne is known to have hardly ever left his hometown, Paris. But his interest in the scientific discoveries of his day and his incredibly fertile imagination resulted in classic works of fiction such as Journey to the Centre of the Earthand 20,000 Leagues Under the Sea. Few however know of his work The Raft (La Jangada in French) which was set in the Peruvian Amazon. He may never have been in the Amazon but his work is full of the colour and mystery of the tropical rainforest and, as usual, memorable characters and dramatic action. Like his contemporary, the primitive painter Henri Rousseau, Verne also knew the local Jardim Botanique quite well and this appears to have been enough for him to get all the details just right.
Another writer who also never set foot in the Amazon but who wrote pretty convincingly about it was Arthur Conan Doyle, the creator (or editor, depending on your addiction to the phenomena) of the works of Sherlock Holmes, “the world’s first consulting detective”. Doyle actually thought more of his historical novels than the popular ones that actually mad him rich and famous. His Amazon novel, The Lost World, is one of several novels featuring the eccentric Professor Challenger, another Holmes-like character this time disguised as a scientist. Like Verne before him Doyle too kept abreast of the most important scientific developments of the age. The Lost World features an isolated mountain world full of lost dinosaurs and monstrous plants. His descriptions were based closely on the lectures of Scandinavian geologist Ivm Thurm whose native Iceland was (not) coincidentally the setting for Jules Verne’s Journey to the Centre of the Earth. Thurm was the first westerner to climb and scale the magical tepui mountain called Roraima that forms the tri-border between Brazil, Guyana and Venezuela. In Venezuela’s Gran Sabana region Mount Roraima is popularly referred to as The Lost World and boasts, if not dinosaurs, an ecosystem of botanical wonder equalled anywhere else in the world.
Neither Verne nor Conan Doyle had to look far for inspiration for their fiction. The 19th century was, after all, the great age of exploration and discovery. Real life Professor Challengers were easily found in the form of Alexander von Humboldt, Charles Darwin and others. The second half of the 19th century ushered in a wave of Amazon explorers inspired by these two giants of natural history. The English led the way in the persons of Henry Bates, Richard Spruce and Alfred Wallace (who ultimately presented his own theory of Natural Selection alongside Darwin’s). 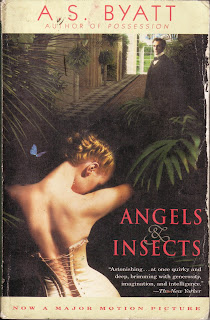 Two of the finest novels based upon these intrepid and indomitable adventurers are A Handful of Dust by Evelyn Waugh (of Brideshead Revisited fame) and more recently, Morpho Eugenia, written by the Booker Prize Winner (Possession), A.S. Byatt. Waugh’s black comedy revolves around a blind recluse living deep in the Amazon who kidnaps (infrequently) visiting explorers so they might read Shakespeare to him during their captivity. An enjoyable film version was made of the book starring Alec Guinness as the over-the-edge hermit. Morpho Eugenia is an excellent portrait of a Victorian naturalist in the Bates-Wallace-Spruce tradition. Byatt captures in vivid detail and poetic cadence the underlying passion for Nature (especially in it’s smallest details) that has bewitched tropical explorers since before Darwin’s time. The (inner) book about ants produced by the Naturalist in the novel is particularly convincing and is surely an homage to that great champion of the small, E. O. Wilson. This book was also made into a film entitled Angels and Insects. 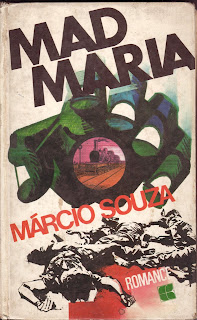 Naturalists were one but one of the many colourful characters to have invaded the Amazon. More common visitors were the desperate and the destitute as described in A Selva (The Forest) by the Portuguese Ferreira de Castro and Mad Maria by the contemporary Amazonian writer, Marcio Souza. De Castro’s semi-auto-biographical novel follows the exploits of a young, idealistic foreigner during Brazil’s Rubber Boom era. Souza’s historical novel uses the construction of the infamous Madeira-Mamore railway as the background for his Conradian tale of Man versus Nature. Both these novels were also turned into films; most recently Mad Maria appeared in an excellent television series produced by Brazil’s Globo network.
One of the most curious characters to appear in an Amazon novel is the American Indian-turned-Amazon Indian in Peter Matthiessen’s At Play in the Field of the Lords. Of a handful of contemporary Amazon novels this is the most political even if it does at times paint mere swathes across the issues where more detail would be welcome. But for a menagerie of characters to rival a Tennessee Williams play this novel has them all from sadistic local sheriff to blindly-ever-seeking missionary and back again. 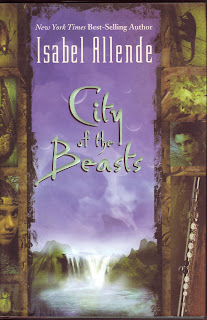 The most recent novels about the Amazon I have read are unfortunately though perhaps understandably (in our era of shallow entertainment) poor. Jack Rollin’s Amazonia reads like another Michael Crichton send-up with few redeeming qualities if any. More disappointing is Isabel Allende’s Cry of the Beast, a smarmy children’s tale of elderly values and environmental politicking. It’s hard to believe that a writer as profound and personal as Allende should have fallen so innocently (or ignorantly) into the save-the-rainforest camp after apparently only one visit there. As such the book reads like a first novel and not a very good one at that. Allende, despite her claims of inspiration and moral purpose, will only confound her loyal fans when they pick up this weekender. If ever a book deserves fictitious authorship this is it.
To end on a positive note I have to stretch my geography a little and mention Gabriel Garcia Marquez’s masterpiece, Love in the Time of Cholera. It’s not exactly set in the Amazon but many of its motifs seem quite Amazonian, particularly the riverboat and river voyages that criss-cross the text from beginning to end. Not every novel by the Colombian master has been great but this is one of them. And while it hasn’t been made into a film yet it was recently turned into an opera called Florencia en la Amazonas produced by the Houston Opera Company. Marquez helped write the libretto and it seems fitting that in the Opera version the story revolves not around cyclical river trips on the Colombian coast but about a riverboat circling the port of Manaus at the height of a cholera epidemic. One could say Marquez had the Amazon in mind all the time; he just didn’t have the right setting first time around.
The End
Novels, Films and more set in the Amazon (or thereabouts)

Films set in the Amazon

* based on the book